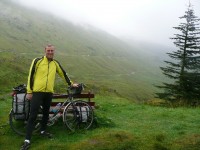 Our shortest day since Cornwall. Not entirely sure how that happened. I had 62 miles on the schedule but we did do a few of those yesterday and we have stopped a few miles short of Barcaldine. No matter, it was nice to finish a bit earlier for a change.

Cycling in Scotland is so easy. There is virtually no navigating to do. The hills are long but not steep. The A-roads we have been on are smooth and fast. They have also been very quiet, a few lorries and coaches but deserted for long periods.

Most drivers are very courteous, wait and leave plenty of room. Especially truck drivers. Coach drivers are a little less inclined to leave a good space. Worst drivers appear to be the much older ones, some are pretty poor at judging overtaking and for leaving room. Not had anything to be overly concerned about or worth getting agitated over though.

The morning was misty and there was a fine drizzle in the air as we packed up and set off. We used rear random flashing lights for only the second time as we headed for the dreaded Glen Croe climb.

Usually the thought of what’s ahead is much worse than the reality. The climb was continuous and steady. Never steep. This made it easy, no going up a bit, dropping some, having to regain the altitude again etc. Just drop into the lowest gear and pedal for 5 miles until you go into the clouds and reach the top admiring the awe-inspiring scenery as you go. We only stopped once and that was at a red traffic light at some temporary roadworks.

We pulled into Rest and be Thankful at the top and took a few piccies. Absolutely amazing cycling experience, I had a huge grin on my face. Ask me to cycle up that 12 months ago and I would have told you where to go!

Where there’s an up there has to be a down. Six (count them) miles of down with barely a pedal turned. Through the most breathtaking, jawdropping scenery imaginable. Find me another 11 miles of cycling like that.

This took us to the shore of Loch Fyne for a few miles of cycling in the opposite diection to JOG to Inveraray. Just before arriving Andrew broke his third spoke so we had a longer tea/coffee/cake break than usual as he used the last spare bought in Crediton. We were in such great moods from the fab cycling we didn’t even care.

The A819 north to Loch Awe was a mini Glen Croe. This road was very quiet, very little traffic. Five miles of steady up and five miles of steady down. We had the slightly odd view of our route ahead through the Pass of Brander being directly behind us for a few miles as we had to follow the shoreline around to get to it. We stopped for some lunch at Lochawe village.

The A85 through the pass was a little busier but the road is wide and easy cycling. Progress was very rapid. It wasn’t very long before we could see Connel Bridge ahead. We stopped to watch the falls as Loch Etive empties into the sea for a bit and got directions to camp from Red.

Just a few more miles to Benderloch and Seaview campsite. Which has the most powerful shower yet experienced. Now I know what cars in a jetwash feel like.

Thanks to Red (Martin) and his Dad Phil we were welcomed into Tralee Bay park next door for a fish supper, a sit down and a chat. We can use their laundry tomorrow too. Cheers guys for sorting us out and making us feel very welcome.

A pretty easy day all told. Either we are getting fitter or it’s getting easier! I need a safety pin to keep my trousers up in the evenings now BTW so the old weightloss program must still be working!