Rock Band, just how good is this?

I’ve played all the Guitar Hero games from the very beginning so I’m pretty good at plastic guitar now (still get whooped by my nephew though, boo) and played through Hard difficulty without any problems. Nearly finished Expert level as well now.

The game also comes with plastic drums (oh yes) and I’ve never played drums before, I found it pretty tough going to start with on Easy level! But now I can smack out a beat on Medium pretty good, dead chuffed that I can do it although alternate right hand and right foot beats still confuse my brain! So you can see what the drums are like check out this YouTube video of someone playing Expert level, that’ll be me soon!

I’ll not mention vocals, except I can’t sing!

I actually completed a Tom Clancy game! My first one ever despite having bought loads of them in the past. I really loved this, glad I played it on normal difficulty as I know I would have got frustrated at the harder level and given up. Ending is OK if a bit lame.

Quite a few things to catch up on, let’s start with the Nintendo Wii.

Got my preordered Wii on release day (8th December) and haven’t stopped playing since! What an excellent little bit of kit. Wii Sports (especially bowling) is excellent fun, Baseball is good too especially when my Stevie Wonder Mii drops catches! Zelda: Twilight Princess is absolutely stonking, one of the best games I have ever played. Played a lot of Super Mario 64, an old N64 title which you can buy from the online store. Everything looks crisp and sharp in 480p and it breathes new life into old Gamecube games.

Best purchase ever? Maybe. Let’s see what the longevity is like.

It’s an EA Sports game so it’s spawn of the devil but it is really good. I wouldn’t have bought this but so many people on my Friend’s List had it that I picked it up from Tesco (£39.96 in store which is pretty good) and I’m very glad I did.

It takes a few rounds to get the hang of it as there is no power meter as in traditional golf games (e.g. Links). You judge your swing based upon the lie, club, wind etc. and pull back the stick accordingly. It gives you fine control over your shots but does initially make putting seem really difficult.

As you play and beat players in the Tiger challenges your player’s skill potential increases and you have to train him/her in training games to fulfill that potential. You can create players in the face morphing option which can create some really freaky looking players.

I gave Colin Montgomerie a good kicking last night, despite him playing pretty well, we were matching each over ball for ball, on the way back in I chipped in and then hit two 40ft putts to pull into an unassailable lead.

Online I’ve played a couple of rounds, the first round was hilarious as we were all over the place, the second was a much more proper affair.

All in all a very good golf game, even if you have to swallow your pride to buy an EA Sports game! 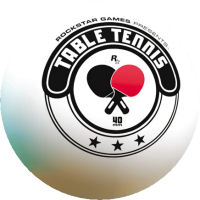 Rockstar Games Presents Table Tennis, the debut next-generation title from the creators of the Grand Theft Auto and The Midnight Club franchises.

Developed by Rockstar San Diego, Table Tennis harnesses the incredible power of Xbox 360™ through an advanced game engine designed specifically for next-gen console technology.  Utilizing the full capabilities of the hardware, Table Tennis is visually stunning, the physics are fluid and natural, and when coupled with the intuitive gameplay, the competition and ferocity found in a live table tennis match is authentically recreated.

Well I was really looking forward to this but now it seems it might not have online play after all which removes virtually all the point of owning the game. Sigh.

Peer pressure got to me in the end and I purchased. The online aspects of this game are love it or hate it. I’ve played one ranked match and got sniped by some sniping idiot about 8 times, I gave him -ve feedback.