Sir Arthur Stanley Eddington is well known as a British astrophysicist of the early 20th century. The Eddington limit, the natural limit to the luminosity of stars, or the radiation generated by accretion onto a compact object, is named in his honour. He is famous for his work regarding the Theory of Relativity. He was also a keen cyclist.

The Eddington Number is defined as E, the number of days a cyclist has cycled more than E miles

For example an Eddington Number of 70 would imply that a cyclist has cycled more than 70 miles in a day on 70 occasions. Achieving a high Eddington number is difficult since moving from, say, 70 to 75 will probably require more than five new long distance rides since any rides shorter than 75 miles will no longer be included in the reckoning.

I stumbled upon his interesting cycling statistic the other day and was curious as to what my Eddington number might be. I only have accurate distance stats from 2008 but I rarely if ever did long distance rides before then so I’ll just discount anything earlier.

Interestingly it works out that my current Eddington number is 49 (E49) and I’m only 5 rides of greater than 50 miles to achieve a milestone E50.

Not sure whether discovering this little statistic was such a good idea, I’m now motivated to do those 5 rides but then when will it stop? I’m not that far off E60 either!!

P.S. Eddington himself died at E87.

I’m about to embark on part two of my and my brother-in-law Andrew’s coastal tour of Wales which may or may not end up being extended further around the coast of Great Britain.

In 2010 we cycle camped from Aust on the English side of the Severn Bridge to Aberystwyth in a week. Including some tough cycling along the Pembrokeshire coast.

In 2011 we plan to start from Aberystwyth and head north sticking to the coast as closely as possible whilst avoiding silly hills and main roads wherever possible. We’ll head along the Lleyn peninsula and right around the coast of Anglesey. We aim to finish at Liverpool after cycling around the coast of the Wirral as returning home by train is a bit easier from there than from our initial destination which was to be Chester.

If you want to keep an eye on how we get on I’ll hopefully be doing daily diary entries on crazyguyonabike.com and I’ll be tweeting from the road.

Fed up of the available gallery WordPress plugins for Flickr. They are either rubbish, crippled or needed so much rewriting that I might as well have written them myself. So I have. And it’s rather spiffing. It takes the JSON feed from Flickr and does some jQuery jiggery pokery to show a rather nice gallery. Look out for it soon.

OK, I know it looks like I’ve done nothing here for aaaaages. I’ve been busy doing some backend stuff. I’ve decided to move from Picasa to Flickr so I have a whole new set of gallery pages ready to be launched. Expect to see them very soon.

I need to keep my astrodiary up to date

Arrived today in Pretoria for my mini work trip to Botswana. Being a Sunday and having suffered a night flight from London we’re not up to much! Walked the dogs this morning around the Sunnyside suburbs and past the Loftus World Cup venue.

Then we went to the one and only sight in Pretoria, the Voortrekker Monument. Erected in the 1930s/40s to commemorate the pioneers who participated in a migration between 1835 and 1854 called the Great Trek. This being a rather controversial aspect of African history the current displays are much more moderate than they used to be. It’s a huge slab of stone the main highlight being the amazing views from the top, even in cloud and rain! I’ve added some photos in the Botswana 2010 album on the photos page.

We’re being amazingly looked after by our hosts, had Italian for lunch and we’re having a braai (barbeque) this evening.

We had a bit of a surprise last week when one of our newly acquired Guinea Pigs gave birth! The cutest thing ever!

We got the pair of female GPs at the beginning of October after our oldest ever GP passed away aged 7. One of them must have been pregnant as they have a long gestation period of 63 days and give birth to one or two mature young. Unlike most rodents baby GPs have open eyes, fur and are fully formed. They eat solid food almost straight away.

The video here shows baby following Mum around with Aunty chasing it from the house! They are all getting on fine though. We need to sex the baby soon to see if it’s a he or a she. We will then need to think about housing them as there’s no way we’ll get rid of it. Either a separate cage for a male and maybe a companion or a bigger cage if it’s female.

And we’d better give it a name!

I’ve finally decided to move to WordPress and lose ExpressionEngine. You can still find the old content at http://www.jochta.com.

I intend to keep an astrodiary on here. Much for myself as anyone else, so I can keep a record of my observing and imaging. I might also do a gaming diary!

First I need to decide what to do with all my photos.

Next week we’re off on a cycle tour of Wales exactly a year after our LEJOG. The plan is to cycle from Chepstow – Swansea – Fishguard – Aberystwyth – Shrewsbury using NCN routes. About 450 miles in seven days (60 miles/day). We’ll be camping and carrying all of our equipment. 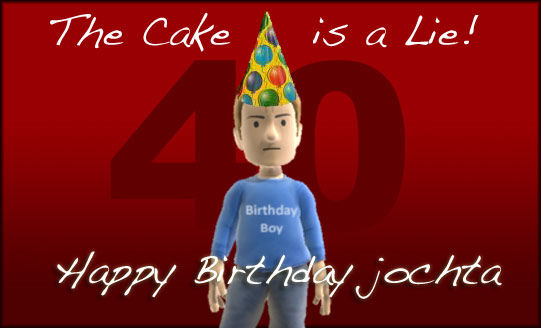 Forty today! This is the ugvx.com banner that Redsmartie kindly created. My grumpy Xbox 360 avatar really makes a statement I feel! Actually I’m feeling pretty chipper about being 40, loads of attention FTW.

Went for a curry and beers last night with Dabe and WildCardZero, just been for a Thai meal for lunch with three girls from the office. I should be 40 more often! Now for a relaxing afternoon until Chowny turns up to discuss websites a bit later.

Nothing planned for this evening apart from relaxing with the family. Ace!

I bought a new telescope a couple of weeks ago (that makes a total of six that I own) and it’s a beautiful piece of work. It’s a William Optics Megrez 72FD and is the best engineered telescope I have used, solid and strong. The focuser is beautiful, it has a 1:10 ratio dual focuser which is just so precise.

It’s only 72mm aperture but the first apochromat (APO) refractor I have owned, this means it is well colour corrected (the colours all focus to the same point) a common problem with cheap refractors is false colour when you observe with them. The Megrez 72 does show some blue blooming but it’s not too bad. The short focal length of 432mm makes it an F/6 which is pretty fast and gives a nice widefield view.

I primarily bought it as a portable scope to take on holidays etc. it comes with a custom backpack to carry it in. I have been doing some imaging with it on clear nights since I got it, the short tube and widefield means it autoguides much better than the large thin-tube reflector and I have been able to do 10 minute exposures with no star trailing at all! You can see plenty of examples of images taken with the telescope in my Astroimages Gallery.