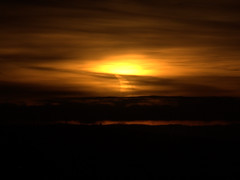 We had some fun trying to spot the partial eclipse. The forecast was absolutely awful so I didn’t hold out much hope of seeing it, despite this I gathered together all the equipment we were going to need for the morning.

I was somewhat surprised when the alarm woke me to find that the skies were pretty clear, I could see Venus through some thin mist and several stars. Looked good for the eclipse. So I raised the family (some were more reluctant than others) and packed my solar scope, binoculars, camera, tripod etc. into the car.

The plan was to drive to Wittenham Clumps to watch the sunrise. However, about 0.5mile north of home we drove into thick fog. Undeterred we continued in fog right to the car park at the clumps. Hopeless. So we drove all the way home again and back into partly clear skies! We parked and ran up the footpath nearby into the field behind our estate and setup with just a couple of minutes to spare.

The Sun rose, partly obscured by thin cloud but I could get some photos, everyone had a look using the telescope and solar specs. Even a couple of passing dog walkers had a look! Shortly afterwards the Sun moved into thicker cloud and was lost from view.

Very pleased to have seen the eclipse, it was worth the panic! I’ve only missed one of the last six eclipses visible from home now which is a remarkable record for the UK!