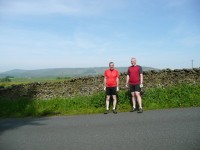 First things first. We’ve had literally a few emails and texts asking us about chaffing. Let me assure you that neither of us (as far as I know) have issues of that nature.

Thanks to my Udderly Smooth chamois cream (or as my wife dubbed it Udderly Butterly, you can’t spread a better bit of butter on your #%$*) and Andrew’s daughter’s Sudocreme we’re well sorted. Please let me know when it’s TMI. And apologies to my daughter’s school if you are now having to explain what chaffing is to the children!

Let me tell you about hills. Bloody great big ones that go on forever. I thought everone said Cornwall and Devon were worst for hills, they were easy peasy compared to today.

We left Clitheroe via Bashall Eaves and a nice steady climb followed by our fastest descent yet, I clocked 70.0 kph on my Geko. Whatever that is in proper money. Up and down again into Slaidburn.

Oh. My. God. The next hill went on and on, mile after mile. It even had the audacity to show us its entire length just to rub it in how long it was. That just about did our legs in and we coasted down the other side into Bentham where we collapsed on a bench. It was not looking good for beating the 10mph average. We were down to 7.

The community shop in Burton in Lonsdale sorted us out with some hot sausage buns though. Thanks to us it is now officially the halfway shop for end to enders as we had our photo taken outside for the shop’s website.

The pick me up got us along the flattish A683 (please could someone fill the potholes in along there?) to near Sedburgh. This is where the second nightmare climb started up to above the M6 above Tebay. That was really tough, the legs were very tired.

We dropped through the famous cutting to and through Tebay to Orton. There was a village festival in progress and the guy in Burton had warned us about the hill out of Orton so we stopped for a cream tea in the church and a rest. We put our names on a couple of balloons and saw them released. Mine’s a winner I tell you.

I’m not sure what they put in the tea in Orton but we were back on track, the hill was steep but not too long and we were soon looking back along the day’s route.

The drop from the top made all the day’s hardwork worthwile. Through amazingly picturesque villages by streams, fast smooth cycling in the sunshine. Brill! We even managed to get the average up from 9.4mph at the top above Orton to 10.0 at the bottom! Ace!

Nit a bad little campsite near Temple Sowerby just off the hideous A66 but far enough away not to be too noisy. We tried to eat in the depressing village of Kirkby Thore without success. I know you have lorries thundering through constantly ignoring the 40 limit but you need to learn to love your village again.

We ate sandwiches and stuff from a BP garage. Sad innit?

So rwas a hard day, glorious scenery. A few long hills rather than lots of short ones. Think we found the latter easier.

Officially halfway (as everyone we met since Clitheroe insisted on telling us) and Scotland tomorrow.