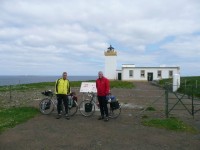 We were so anxious to get started we were both up before 6am packed and ready to roll at 7am! There had been a couple of sharp bursts of rain during the night but the morning was trying to be bright but with the niggly but not strong northerly breeze still.

We were headed east though so it didn’t bother us too much. We have been very very lucky with the weather. The last two days would be very tough with bad wind and/or rain. Our friend Sam who we shared a day with back in Devon had the wind so bad from Bettyhill it actually knocked him off of his bike and he had to push for a short stretch.

The A836 is wide, smooth and almost deserted. Great cycling road with views of the sea to our left. It’s hilly for the first 20 miles though. It climbs headlands between little sandy bays 4 or 5 times. Quite tiring but nothing really too bad or steep.

Before Thurso it flattens out with just one small climb before the descent into town. We didn’t linger and cycled straight through. According to the welcome sigh the only thing it’s famous for is being the birthplace of the founder of the Boy’s Brigade.

After Thurso it was just a case of getting the job done. We were on mileage countdown, each sign greeted in despair when it only indicated one more mile done when it felt more like three! The weather was getting sunnier and sunnier, we’d had two very brief bursts of rain during the ride. Too chilly to take off jackets though.

It’s a pretty flat easy run in and soon we could see the dilapitated hotel and we rode side by side down the slope to the finish line. A punch of the air and we’d done it!

We got the required photo done with Andrew’s cycle computer mileage of 1071 miles which has been reading a little under. My Geko GPS reckons 1083 miles but who cares we’d done it! I’ll go through the GPS trace when I get home and get ‘official’ distance, ascents and average speeds.

After ringing home we had a coffee in the caf