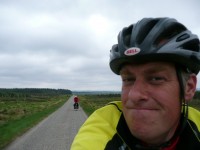 Nearly there! Just fifty miles between us and JOG.

Phew what a tough penultimate day. We were both exhausted as we got to Bettyhill.

The day dawned grey and overcast but still. Much much cooler too, definitely not a shorts day. We got away at 8am and stocked up on food in Evanton. We made steady progress across Easter Ross on the B9176 which was basically one long climb for many miles, a couple of descents knowing you would have to regain the lost altitude.

The hills were hidden in low cloud but we did glimpse the A9 bridge over the firth. The descent from the top was exhilirating. A smooth windy road which was so much fun.

By the way the NCN route alongside the B-road to Alness is nuts. Basically a rough path in the woods that crosses the road several times. Why would anyone choose to use it instead of the quiet road?

Anyway, the A836 to Bonar Bridge and Invershin was easy and quiet. To Lairg it’s a steady unsteep climb and descent. I expect the B-road NCN alternative has steeper gradients. We also saw the NCN cross the Kyle of Sutherland adjacent to the railway bridge via three flights of steps!

Lairg, the last bastion of civilisation north. We stopped for tea and cake.

The single-track A-road north was fun for about five miles. Flat, quiet and quite scenic. After about ten miles it started to get a little dull. After twenty miles we started to go a little crazy. By thirty miles we were talking to the rocks. By forty miles we’d had enough.

We felt a little sorry for the JOGLErs that past them, what a depressing way to start the journey south. Hour after hour of nothing.

You round a corner expecting something new and you’re faced with the road snaking into the distance for another few miles. Very desolate. Rocks and heather and heather and rocks. Great views and vistas though, very very quiet as well. We stopped for lunch beside the road at Crask. Two houses in the middle of nowhere. One of them a pub.

At the throbbing metropolis of Altnaharra we turned onto a B-road that looked identical to the A-road except it went alongside Loch Naver which added some interest. We bought ice creams at the most isolated Caravan Club site there must be. Looks like midge heaven staying there.

Onwards we plodded alongside the River Naver. We were getting weary. North of Syre the road becomes a little undulating too but more dwellings and farmland.

At last we got to Bettyhill and camping. Tired but happy to be on target to finish.

Tomorrow’s plan is to start early and try and finish at lunchtime. Get the necessaries done, relax a while. Then cycle out to Duncansby Head to get to the most extreme northeast point. Then onto Wick to camp for the train home on Thursday morning.