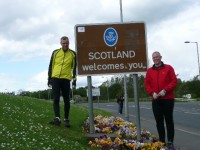 This was, on the schedule, the least hilly day on the entire route. It should therefore have been the fastest day. Sadly it was the first day we failed to beat the 10mph average. Doh!

Why was this? It was flat, very flat for large sections. It was because of the darned wind. We’ve been lucky so far and had tailwinds or light winds which didn’t matter. Today was a strong blustery northwesterly veering westerly later. It also brought a few hefty showers.

It was straight into this wind we started the day in on the undulating road following the River Eden and Settle-Carlisle railway towards Carlisle. In Lazonby we stocked up on drinks and snacks and had a chat with three women doing the Coast to Coast. I also saw my first Google Streetview camera car here.

The wind made it slow going as it negated all the downhills. Having to pedal downhill should be against the law! But we eventually got to Carlisle and the hunt for the gas cylinder began. Millets didn’t have any so they sent us to Trespass who didn’t have any. Repeat process 3 times and eventually in the 4th shop we could buy a cylinder. So many camping shops, so few cylinders.

We had lunch in Carlisle whilst we were there. We used NCN 7 and the new road alongside the new M6 to get to Gretna, a smooth fast road without a headwind.

Scottish border! The first house is a lot rundown from what I remember. Picture taken it was off westwards to Annan and Dumfries. Lots of very straight, very dull roads which were hell in a galeforcd westerly wind. Stupid unnecessary loop in the NCN route at Annan to Newbie added on some pointless distance. The diversion to Powfoot is possibly worth it though the road is rough in places.

We struggled on and eventually got to Dumfries to find the only camping site marked on the map had closed down. We had to do another 5 or so miles to the next one near Shawhead which is very nice.

Afraid the day was spoiled by the wind, but as I said we’ve been lucky up to today. Better luck for tomorrow hopefully although the forecast is for rain apparently. BTW I lost about a mile or so of data due to GPS battery failure.