That’s what you will be when you see my new laser pen! It should project a green beam at night which will be useful for pointing out astronomical things to people. I’m going to try it out during my after-dinner talk at the Reading 41 Club tomorrow night.

My MiniDV digital camcorder died a couple of years ago, it no longer played the tapes or recorded properly. Which was a shame as I had several hours of video I had no way of viewing, some of it was backed up to VHS but not all of it and in 2002 I didn’t have a powerful enough PC to capture the video. To get it repaired was going to be costly so I never got it done, so that was that. Until this week when I decided I wanted to see some of these videos again and I found out that MiniDV camcorders are stupidly cheap now, for little more than £100 I bought a decent camera with a DV Firewire output which means I can play and capture the videos! OK, I now have two camcorders (I already have a HDD one which I use) but I’m sure I’ll find some use for it.

So I’ll be spending some happy evenings backing up all the tapes to AVI and then onto DVD.

You can see my first capture in the Movies section. 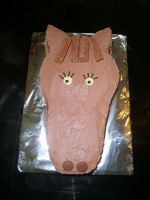 What a great Saturday I’ve just had, best day for ages. It was my daughter’s 6th birthday party and as usual I had to create a cake masterpiece to order. This year she wanted a horse and I think I did a good job, very yummy it was too. The party went very well despite the Abingdon traffic making us 10 minutes late, whoever designed that new traffic system should be made to lie in the middle of Stratton Way during rush hour. She was happy, we were happy, her friends were happy, I had a nice chat with one of the other mums and dads.

Then it was Reading AS’s monthly meeting in the evening where we had the co-presenter of the BBC’s Sky at Night, Chris Lintott, as our main speaker. I think this was possibly the best meeting since I became Chairman, I thought I presented well (I was a bit average when I started but now growing in confidence) and Chris was excellent. A good speaker, a good subject and unlike a lot of speakers he stayed to see the member’s contributions in the 2nd half (including mine on MESSENGER) and even went to the pub afterwards with us for a drink and a chat. A top bloke, can’t fault him for effort.

When I got home I started watching the 4-part BBC series Space Race on DVD, what an excellent series. Watched the 2nd part last night and will make sure I get to see the other two this week.

All in all a really really good day, followed by a relaxing Sunday. Maybe I’ll be a bit happier and more positive this week! 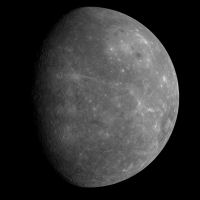 This image has got me all excited (click for full size version).

This is Mercury, and not only that but the first time we have ever seen this side of the planet nearest to the Sun. Yeah, OK it looks like the Moon. We have only ever visited Mercury once and that was a flyby 33 years ago and that only managed to see one side of the planet. The latest mission, Messenger, will eventually go into orbit in 2011 but it did its first flyby on Tuesday and imaged part of the side we have never seen.

Mercury is my favourite planet, not the most visually interesting planet clearly, but it’s elusive, mysterious and difficult to observe. You will have seen my photos of it in my gallery no doubt. It’s also interesting in that it is very dense, has a magnetic field and a thin atmosphere. It could hold the key to how the inner planets, including the Earth, formed. Many more images from this flyby will be released in the coming days and we expect exciting times in 2011.

This all helps towards material for the main speaker talk I’m giving at the Maidenhead Astronomical Society in May on Mercury as well!

There are things happening life-wise, probably far too early to get excited or even to know if it’ll ever happen. But secondments are possible and not for me! Too early to discuss details, need to do some thinking and planning.

Also on the gaming front I bought a PS3 at last. The last of the three current generation consoles for me, I was always going to get one eventually but there were several reasons why I had delayed. It’s a neat piece of kit, it does some things better than the other two (Wii and 360) but some things worse. So now I have the best of all worlds.

So then dear readers (not that there are any of course). Christmas came and went like it is want to do, everyone had a jolly time, prezzies all round. I got a mountain board to go with my kite, check out the video of me hurtling down a mountain on it in the movies section!

It’s a New Year of course, so a happy one of those to everyone, which has got me thinking what I want to do this year. I’m going to be ambitious. One day I’d like to move house, something a bit bigger, I like this house despite its faults. It has a large garden, it’s in a nice village, it’s quiet but it isn’t big enough. Extend it maybe? Well by the time we’ve done that I think I would prefer a whole new house then get tied down here. A new job. Friday will be the 20th anniversary of me starting my current job. I’m a lifer and that’s beginning to scare me. It’s comfortable, it’s secure, it’s enjoyable and has a great pension. So why am I so bored and fed up in it? So not a whole new job then perhaps. A change within a job maybe, another secondment? Lancaster has been mentioned, not sure I want to do another stint away from the family, not sure the missus will be too perky about it either.

My brother returns from New Zealand after five years next summer. I wish I was as brave to do that, pack everything in and move to the other side of the world. A colleague of mine did it with three small children last year. Not sure I have the bottle. But I don’t want to spend the next 20 years doing the same old stuff until I retire. I want to achieve, I want to do new things.

One thing I have almost definitely decided to do is to step down from some of the community things I do. I’ve done various committees for over 10 years, some longer than that. Time to give some of them up, time to take a break from that, I’ll do it again one day, just want a year off. I want to enjoy my hobbies without having the stress of organising and running them too.

I’m going to try and write a list of things I want to achieve.

It’s been an odd week. Today came the news that seems to herald the final nail in the coffin for Oxford Speedway. After a reprieve when a saviour came forward to save us from the brink of closure last season when the previous promoter decided to close us down it was looking so positive for 2008. We finished 2007 on a high, we’d done exceptionally well in the Conference League despite our torubles, we had a great team, a great atmosphere and the smiles had returned to the supporters faces. Even the official website is still heralding the bright future for 2008 (http://www.oxford-speedway.com/). But the stadium owners have decided for whatever reason to throw a spanner in the works with unrealistic rent demands. Seems odd when they take money from the carpark, bars and restuarant during the speedway meetings. Instead of some income they will have none, does that make business sense?

It’s fair to say that with no speedway the sport will be lost to the city, the stadium is in a residential area (although when it was built 60 years ago it was in the middle of nowhere) and planning permission for motor sports is unlikely to be granted again.

So I’ve been thinking about my Dad a lot this week. We used to go to speedway together every week without fail, it was our special time, just me and him from when I was a boy. This news coming on top of the anniversary of his death on Tuesday (when I also had a table tennis match to contend with, a sport my father started me in) has really just about done me in.

I’m so glad it’s not my 40th birthday next week (that’s next year), I don’t think I could have coped with that as well!! I’m looking forward to some time off next week over Christmas, I need a break from stuff.

Two years already since my Dad passed away. Placed some flowers on his grave yesterday afternoon. What have I achieved in the last two years? Erm… nothing of consequence as far as I can tell.

Bloody hell, where did that come from. Better do some shopping!

I got asked today why I have such a tall header graphic and that it adds nothing to the site and is pointless. It’s just a picture of pebbles. Well I refer readers back to why I chose Buttons of my Mind as my blog title. As you will know this comes from a song by The Scaffold, but why haven’t I a picture of a load of buttons then? Well, the lyrics of this song are…

You’re not mine anymore as we take our last walk together,
Along the midnight shore,
Before we say goodbye forever.

The picture is of course a picture of the midnight shore. Simple really!