Here I am sat on the balcony with a beer updating my blog. A long journey and I’d forgotten what a culture shock Africa is the first time you see it, but the house is lovely, the weather is pleasant, warm but not hot with a nice breeze off of the sea. I took some pictures from the plane as we landed, some fantastic views. I will up them here later.

Watched a terrible film with McFly in it. Waiting in lounge drinking complimentary coffee. Next stop Maputo.

I don’t think I’ve forgotten anything! Picking the children up from school shortly and then home to wait for the taxi. I should be in Johannesburg around 9.30 tomorrow morning and then I have to wait for the connecting flight to Maputo. Arrival time is 2.55pm. As soon as I have an internet connection I will update the blog.

So much to do, so little time! That’s what it feels like anyway. The trip has come at a slightly awkward time really, the children back at school tomorrow. My Table Tennis league starts again in a couple of weeks and I’ve been collecting fees, team registrations and getting the website ready. My astronomical society starts its new session in a couple of weeks as well, so organising the speaker programme and arrnaging memberships before I go. And I haven’t even thought about packing yet…. gulp!!

Any avid readers of this blog (anyone?) will know that the primary purpose of this website is to provide an online diary during my trip to Mozambique. So I thought a bit of background should be in order!

Mozambique is a country in southeastern Africa, bordering the Mozambique Channel, between South Africa and Tanzania. The capital is Maputo (where I will be) which is in the extreme southern part of the country near the border with Swaziland and South Africa.

Almost five centuries as a Portuguese colony came to a close with independence in 1975. Large-scale emigration by whites, economic dependence on South Africa, a severe drought, and a prolonged civil war hindered the country’s development. The ruling party formally abandoned Marxism in 1989, and a new constitution the following year provided for multiparty elections and a free market economy. A UN-negotiated peace agreement ended the fighting in 1992. In the 21st century Mozambique has continued the sound economic policies that have encouraged foreign investment.

Interestingly (or maybe not), the flag of Mozambique is the only one in the world which features a modern weapon, a Kalashnikov assault rifle symbolising defence and vigilance but harking back to the armed struggle for independance. There is currently a competition to design a new flag as the parliamentary opposition insists that a civilized country, and Mozambique certainly believes it is a civilized state, must not have a national flag with a machine-gun depicted on it. However this is causing a heated debate! 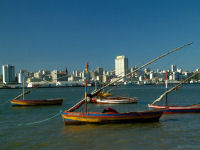 Maputo was founded in the late 18th century, the city was named Lourenço Marques after the Portuguese trader who first explored the area in 1544. In 1895, construction of a railroad to Pretoria, South Africa caused the city’s population to grow. In 1898, Lourenço Marques became the capital of Mozambique. After independence, the city’s name was changed to Maputo.The name reputedly has its origin in an old, fierce tribal leader, Maputa, who once ruled over the region. Maputo is a planned city with square blocks and wide avenues, with Portuguese traces and their typical architecture of the 70s.

Maputo is a melting pot of several cultures, with a strong South African influence. The Bantu and Portuguese cultures dominate, but the influence of Arab, East Indian, and Chinese cultures is also felt. The cuisine is very elaborate, due especially to the Portuguese and Muslim heritage. Sea food is also very abundant (I’m going to starve!).

So there you have it, six weeks in a tropical paradise working ever so hard developing a website, it’s a tough job but someone has to do it!