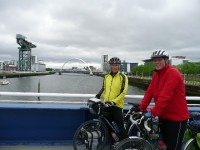 By far the easiest day’s cycling we’ve had. Flat (the ascent below is clearly wrong, I’ll need to check the data when I get home), fast and easy.

It’s amazing that we can now get on the bikes and knock out 70 miles and barely flinch!

We started in Troon and got a nice early start to cancel out the 10 miles we needed to do to get back on course. The A759 was about a billion times easier than going back over that stupid hill.

We were setting a blistering pace and averaged nearly 14mph getting to Kilmaurs and Fenwick.

The A77 has recently been replaced by the M77 and is now virtually deserted Not only that but it has an amazing segregated cycle track alongside. Although a gentle gradient upwards to start with the good surface allowed for rapid progress.

The descent through Newton Mearns and into Glasgow was fantastic. Definitely the way to enter the very cycle friendly city as we barely had to pedal for miles and miles!

We picked up the NCN 7 signs to get us across the Clyde via Bell Bridge. Not too bad a route despite it leading us to a fence across the road at one point. A small diversion and we were crossing the river.

Picking up the NCN route on the other side was much harder so we ended up on a road through an industrial area which had different smells at each business. Fascinating place. We got back on the less pleasant NCN route to Clydebank where we stopped for lunch. I really want to try deep fried pizza one day.

Argh. First puncture ever on my bike, not bad for over 2000 miles cycling. Front punctured by a thorn. Easy repair and along the superb Forth and Clyde canal towpath to Bowling. Andrew’s bottom bracket hadn’t been sounding great for a while so he had a precautionary replacement done at Magic Cycles next to the canal. Better safe than have it fail in the middle of nowhere in the next few days.

The NCN route took us through Dumbarton and was very easy to follow. Then along the River Leven to Balloch. Mostly very well surfaced and easy offroad cycling.

We then picked up the West Loch Lomond Cyclepath towards Luss. Using a mixture of path alongside the A82 and little roads the path isn’t too bad. A little rough and narrow in places.

We had a tea top in Luss and continued. Anyone who uses the A82 rather than the cyclepath north of Luss must be crazy. This must be THE best cycle route in the UK. It uses the old A82 road right on the loch edge and is smooth, fast and incredibly scenic. Beats being amongst the trees and traffic on the new road by miles.

Just before Tarbet it returns to a rather rough path alongside the main road. But easy to go on the road for the last couple of miles. We took the A83 out of Tarbet for the easy blast into Arrochar, past the closed campsite there and onto the Forest Holidays site in Ardgarten where we camped right next to the loch edge.

Master Chef Andrew cooked up a culinary delight from what he didn’t drop on the ground and we hastily retreated into the tents to avoid the midge insanity outside.

Another fab days cycling. We went from coast, to rolling farmland, to city, to riverside, to lochside, to highlands all in one day. Just the small matter of the climb up to Rest and be Thankful in the morning!